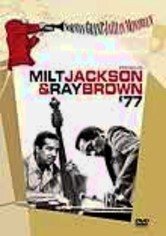 1979 NR 0h 51m DVD
One of music's most influential men in the 20th century, Norman Granz brought live jazz to the masses with his "Jazz at the Philharmonic" concert series. Producing some of the great names in the genre, such as Billie Holiday, Dizzy Gillespie and Count Basie, he became a legend in every aspect of the jazz music scene. Commemorating Granz's innovations at the Montreux Jazz Festival in 1977, vibraphonist Milt Jackson and bassist Ray Brown team up.