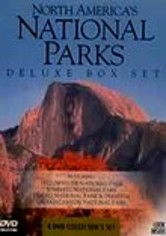 2006 NR 4 discs
America's parkland treasures come alive in this travel documentary. First stop: Yellowstone Park, where Old Faithful proves it's king of the geysers and wildlife abounds. Viewers will also witness the grandeur of Yosemite, the stunning beauty of Denali and the rugged splendor of the Grand Staircase. Each of the four stops proves why the continent is considered one of the world's most picturesque, its assets captured here in cinematic glory.