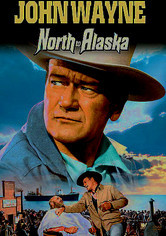 1960 NR 2h 0m DVD
A tough, hard-drinking gold prospector (John Wayne) agrees to go pick up his partner's fiancée, but winds up with a beautiful substitute (Capucine) instead. When both partners vie for her favor, trouble breaks out -- in spades! It's the Duke like you've never seen him before in an entertaining Alaskan adventure co-starring Ernie Kovacs, Fabian and Stewart Granger. Directed by Henry Hathaway.