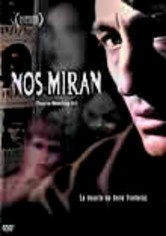 2002 NR 1h 44m DVD
In Norberto Lopez's chilling film starring Carmelo Gomez, Manuel Lozano, Margarita Lozano, Iciar Bollain and Massimo Ghini, a detective discovers evidence of supernatural beings that hover around humans, keeping their watchful eyes over them and spiriting them away to a mysterious fate when their time comes. The more people turn up missing, the more the sleuth is convinced his hypothesis is true. But what can he do?