Nostradamus: A Voice from the Past 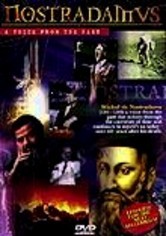 Nostradamus: A Voice from the Past

1998 NR 1h 0m DVD
French doctor and astrologer Nostradamus achieved everlasting fame with his 1555 book &NFiThe Centuries,&NFi_; which contained more than 900 predictions, written as four-lined rhymed verses, or quatrains. Over the years, scholars have credited these writings as prophesizing the reign of Napoleon, the atomic bomb, the moon landing and the assassination of John F. Kennedy. This documentary examines these and other prophecies.