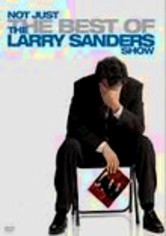 1992 NR 4 discs
As the title says, this isn't just the best of "The Larry Sanders Show," the Emmy-winning cable-TV hit about the life of talk-show host Larry Sanders (comedian Garry Shandling). It's also a collection of hours of exclusive, behind-the-scenes footage capturing Shandling interacting with a slew of the show's celebrity guests, including Alec Baldwin, David Duchovny, Jerry Seinfeld, Jon Stewart, Sharon Stone and Tom Petty.