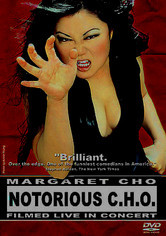 2002 NR 1h 35m DVD
Stand-up comedian Margaret Cho, whose first concert movie became a surprising art-house hit, returns in another one-woman show filmed during her wildly successful 2001-2002 tour, speaking less about her run-ins with Hollywood and her Korean family (though both subjects still provide plenty of fodder for laughs) and more about sex and sexuality. Cho's uninhibited approach is the perfect vehicle for raunchy topics such as her visit to an S&M party.