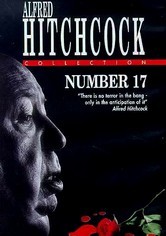 1932 NR 1h 23m DVD
A hodgepodge of characters -- including a hobo, a deaf-mute, a detective and a gang of jewel thieves -- meet in an abandoned house that takes on a personality all its own. One of director Alfred Hitchcock's earliest films, this 1932 thriller shows signs of the cinematic storytelling that would transform him into the Master of Suspense. The ensemble cast includes Leon M. Lion, Anne Grey, John Stuart, Donald Calthrop, Barry Jones and Ann Casson.