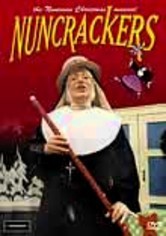 2004 NR 1h 30m DVD
Mother Superior (Rue McClanahan) and her musical sisters are hitting cable television in this holiday spin-off of the musical "Nunsense." The singing sisters work feverishly in the convent basement, preparing a Christmas special to be televised on cable. Special guests include Father Virgil and a comical narrator (John Ritter). Songs include "Twelve Days Prior to Christmas," "Santa Ain't Comin' to Our House" and "We Three Kings of Orient Are Us."