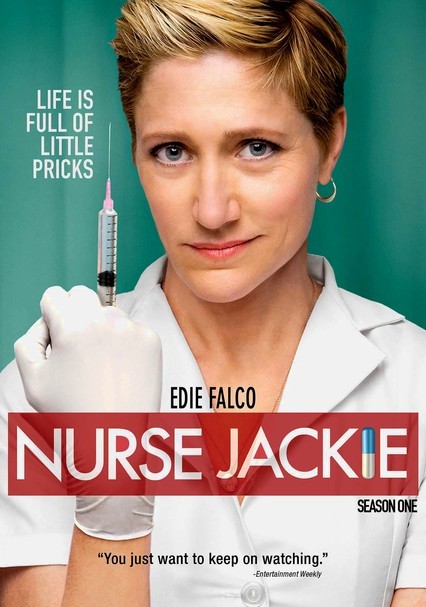 2009 TV-MA 3 discs
Edie Falco stars as feisty emergency room nurse Jackie Peyton, who boldly navigates the storm of patients, doctors, fellow nurses and her own demons at a New York hospital -- occasionally with the aid of unprescribed prescription drugs.

Parents need to know that the main character in this mature medical dramedy is a complex anti-heroine who grapples daily with her addicton to prescription painkillers and is having an affair with a colleague -- even though, on the surface, she's happily married with two young children. Conversations are riddled with strong language, including unbleeped words like "f--k," "c--t," and "s--t," and the emergency room setting produces plenty of blood and guts. Some brand names are mentioned, too, mostly in the form of specific prescription drugs and upscale merchants.

The main character is married but is having an affair with a colleague -- and when they have sex, they do it at work. They're usually clothed, so no sensitive body parts are shown, but you'll see plenty of thrusting.

Given the hospital setting, there's a good amount of bleeding, vomiting, and other graphic injuries -- but not as much as on a show like ER. Examples include a patient losing his ear; another physically attacking a nurse, hitting her hard in the face; another coming in high with serious burns after inserting a Roman candle into his anus; and another needing more than 250 stitches to close her wounds after a violent attack.

The series features the complex double-life of a talented, compassionate nurse with an addiction problem.

Expect mentions of brands like Barneys New York, Manolo Blahnik, and Bergdorf Goodman thanks to a materialistic doctor who loves to shop for expensive clothing. Drugs like Zyrtec, Percocet, Seconal, and Vicodin are also mentioned by name.

Jackie has a serious dependency on prescription drugs and takes them at least three times a day in various, often desperately creative, ways. She's sleeping with the hospital pharmacist, who supplies her with many of her pills, but she goes to great lengths to keep her addiction a secret from her husband and colleagues. Other characters drink alcohol, and even some doctors -- including a pulmonary specialist -- are shown smoking cigarettes.