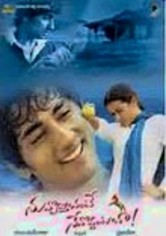 2005 NR 1h 30m DVD
Abandoned by their wealthy father and orphaned when their mother dies, siblings Sivarama (Srihari) and Siri (Trisha Krishnan) are wary of rich people and protective of each other. But what happens when one of them falls for the enemy? When wealthy Santosh (Siddardth) asks to marry Siri, big brother Sivarama decides to make him pass a test: If Santosh can grow more produce than Sivarama on a similarly sized piece of land, he can marry Siri.