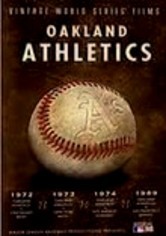 1972 NR 2h 54m DVD
Distinguished by Catfish Hunter's pitching, Joe Rudi's and Bert Campaneri's hitting and an earthquake that nearly cancelled a championship, the Oakland A's have had a dramatic history in the World Series. This compilation celebrates the Athletics' glory through crowd-cheering highlights from the 1972, 1973, 1974 and 1989 championships, recapping each game and adding dugout and locker room footage.