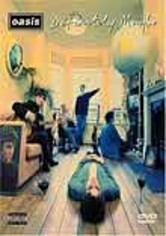 2004 NR 2 discs
With this DVD, British alternative rockers Oasis commemorate the 10th anniversary of their debut album "Definitely Maybe." All the songs from the album are included, as well as the B-side recording of "Sad Song." Extras include a song-by-song documentary of the recording sessions and creation process, live performances of every song from the album and original "Definitely Maybe" promo videos with alternative versions and directors' commentaries.