Oath of Vengeance / Law and Order 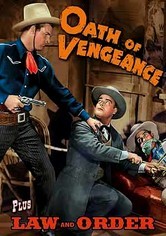 Oath of Vengeance / Law and Order

1944 NR 1h 56m DVD
Serial star Buster Crabbe -- best known for his iconic portrayals of Tarzan and Flash Gordon -- takes on the role of Billy the Kid in this pair of black-and-white classics set in the wilds of the Old West. In Oath of Vengeance (1944), Billy tries to stop a scheming banker who's buying up the whole town. Then, in Law and Order (1942), Billy masquerades as a U.S. army lieutenant who looks like he could be his twin.