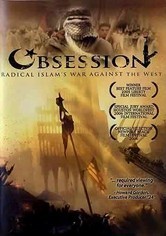 2006 NR 1h 17m DVD
Featuring clips from Arab-world television and interviews with a range of personalities, including guerilla fighters and self-styled terrorists, this film chronicles the fanaticism arising in extremist wings of modern Islamic fundamentalist groups. In a documentary that is both provocative and unflinching, filmmakers Wayne Kopping and Raphael Shore explore topics such as "The Culture of Hatred," "Jihad in the West" and "Media of Terrorism."