Occult History of the 3rd Reich #2: The SS Blood & Soil 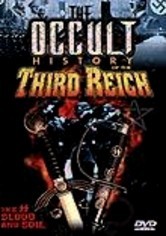 Occult History of the 3rd Reich #2: The SS Blood & Soil

1998 NR 0h 55m DVD
The Nazis were famous for their ruthless and sinister ambitions; part 2 of this provocative series explores an even darker side of the fascist regime: the Schutzstaffel, aka the SS -- an elite, semireligious order first created to guard Adolf Hitler. From its roots in the occult and German mysticism, the SS evolved into a racial oligarchy, deeming itself ordained to subjugate all other races and to engineer ethnic "cleansing" through eradication.