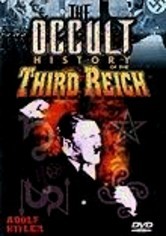 1998 NR 0h 50m DVD
Using newly uncovered footage, this revealing 1999 documentary -- the last in a three-part series -- chronicles the occult beliefs underpinning the infamous Nazi regime and the doctrine of National Socialism. A fanatical fascination with mysticism led Adolf Hitler to see himself as a modern messiah, an idea buttressed by deputy party leader Rudolf Hess. Hitler used occultism to create a hypnotic effect on the German public.