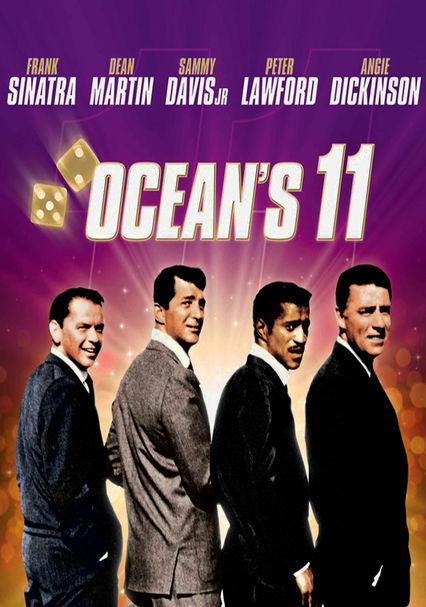 1960 NR 2h 7m DVD
Frank Sinatra leads an all-star cast as Danny Ocean, who decides to knock over a few casinos on the Las Vegas Strip with his buddies -- including Dean Martin, Sammy Davis Jr., Joey Bishop and Peter Lawford -- in one of the merriest heist movies ever. The summit meeting of Sinatra's "Rat Pack" cronies, this comic caper was filmed on location in Vegas during the daylight-hour downtime between the real-life group's ongoing gig at the Sands Hotel.

Parents need to know that the whole movie amounts to a glorification of thievery. Not one character questions whether it's morally right to pull off the big casino robbery, just whether they can get away with it. In accord with the studio censorship codes of yesteryear, though, crime does not pay in the end (except a modest handout to an innocent, struggling widow). The Las Vegas "fun city" ambiance of gambling and high times is robustly present, with much drinking, smoking, and other grownup pursuits idealized. Note that the casinos are shown behaving legally and ethically, even forbidding a prominent celebrity (comic Red Skelton, portraying himself) from exceeding his betting limit. That little vignette is as close as it comes to a Gamblers Anonymous PSA. Households who disapprove of gambling altogether still won't be happy. Neither will those sensitive to the male characters' occasional denigration of women and a few racial gags made at Sammy Davis Jr.'s expense.

Tame scene of a bikini-clad snake dancer in a burlesque house, with the attitudes and whistles signifying to young viewers that something naughty's going on. Some talk of Danny Ocean's extramarital affairs.

A saloon-style fight, and a cast-off girlfriend throws a vase at Danny.

Main characters are all thieves (and decorated WWII heroes). Danny is an unapologetic womanizer, cheating openly on his estranged wife (who is less upset about that than his lawless lifestyle). The guys make snide comments about women, joking about taking away their rights and making them all slaves, symptomatic of the "Rat Pack" idea of a grown-up boys' club. A black man is included on equal footing with the rest, but there are some skin-color jokes at Sammy Davis Jr.'s expense (but behind the scenes Frank Sinatra was a passionate supporter of the civil rights cause).

The real-life Vegas casinos mentioned are no longer in existence -- but the city sure is.

An excess of "cool" drinking and cigarette smoking (Shirley MacLaine has a comic-drunk cameo).