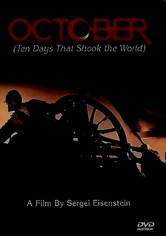 1927 NR 1h 43m DVD
Created to commemorate the 10-year anniversary of the 1917 October Revolution in Russia, this re-creation is considered one of director Sergei Eisenstein's (Battleship Potemkin, Alexander Nevsky) best works. Known for its brilliant use of montage, reenactment, lighting and editing, this historical masterpiece diligently chronicles the events leading up to the Bolshevik takeover of the Kerenksy regime.