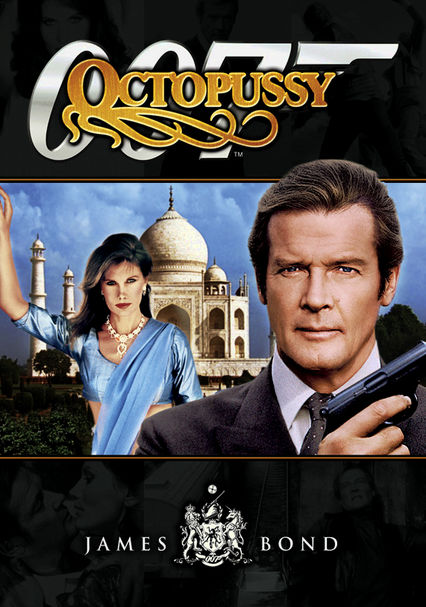 1983 PG 2h 11m DVD
Agent 007 springs into action after uncovering a terrorist plot hatched by a renegade Soviet general and an exiled Afghan prince to launch a nuclear attack -- financed by the sale of Fabergé eggs -- against NATO forces in Europe.

Parents need to know that Octopussy is the 13th official James Bond film (an unofficial one, Never Say Never Again, was released the same year). Roger Moore appears in his sixth of seven outings as Agent 007. It's one of the sillier outings, with more jokes but also lots of sexual innuendo. It features the usual number of shootings, minor characters dying -- plus one good supporting character -- and explosions. Bond sleeps with two women, but nothing sensitive is shown outside of the usual semi-naked silhouettes during the opening titles. Language is nil, aside from the movie's title and a use of "Thank God," and there's a little less drinking than usual, although we get one joke about a guard who thinks he's drunk too much. This one will be for die-hard Bond fans only.

During the opening titles, women are shown in silhouette, and some of them appear to be naked. The movie is filled with humorous innuendo, including jokes, and a shot of 007 zooming a camera lens toward a woman's cleavage. Bond kisses and sleeps with two women and flirts with a few more. (Nothing sensitive is shown.) A woman emerges naked from a pool, but her sensitive parts are obscured. Women are generally treated as objects on display for the male gaze.

Several minor characters die, including one helpful good guy. Corpses are shown hanging in a meat locker. The movie has guns, shooting, and explosions. A bad guy uses a yo-yo with a skill-saw blade as a weapon. Another bad guy is a circus knife-thrower. There's a sequence involving dangerous stunts on a plane. Men are shown punching tough, warrior women during a fight scene.

Aside from the title, and a use of "Thank God," language is not an issue.

James Bond may be a good guy and may have saved the world, but he seduces women, drinks alcohol, doesn't seem to care much about destroying property, and never really learns any lessons. Moreover, he has a license to kill and can leave dead bodies in his wake with no consequences. Women are generally treated as objects, helpless and powerless. This movie has some cultural stereotypes as well.

Bond drinks champagne in one scene. Sometimes drinks are prepared but not consumed. In a late scene, a guard is drinking on duty and looks comically at the bottle when he sees circus performers scaling the walls of the palace he's guarding. A German tourist is shown drinking beer.