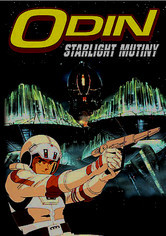 2004 NR 1h 36m DVD
Anime hero and fledgling space soldier Akira Tsukuba has always been a bit of a hothead. Impetuous, impulsive and slightly out of control, Akira's eager for adventure -- and when he's chosen to pilot a space vessel called Starlight, he thinks his chance at greatness is finally at hand. But when he winds up on a planet surrounded by murderous robots, he begins to wonder whether his unruliness is to blame. Can he pull it together?