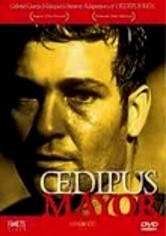 1996 NR 1h 40m DVD
This modern take on the Sophocles tale tells the story of a local Colombian mayor charged with negotiating peace between guerrilla revolutionaries, peasants and his nation's army. As he falls into a passionate relationship with a warlord's widow, the young mayor sets the stage for his ultimate downfall. Jorge Perugorría, Ángela Molina and Francisco Rabal star in this steamy drama co-written by Nobel Prize winner Gabriel García Márquez.