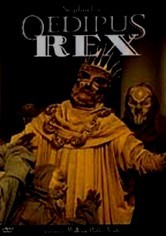 1957 NR 1h 27m DVD
Acclaimed actor-director Sir Tyrone Guthrie filmed this 1957 masterpiece production of Sophocles's beloved Greek tragedy. Just as the ancient Greeks performed it, the actors here also wear masks, which add a classic touch. Oedipus Rex, the story of a Greek man who killed his father so he could marry his mother and quench his primal sexual thirst, has for centuries influenced countless plays and films.