Of Civil Wrongs and Rights 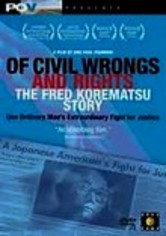 Of Civil Wrongs and Rights

2007 NR 1h 16m DVD
Eric Paul Fournier's Emmy Award-winning film chronicles the remarkable life of Japanese-American Fred Korematsu, who was stripped of his rights and sent to an internment camp in 1942. For the next 39 years, Korematsu -- an ordinary shipyard worker -- fought against Executive Order 9066. Taking his relentless quest for civil rights all the way to the Supreme Court, he was eventually awarded the Presidential Medal of Freedom in 1998.