Off Road to Athens 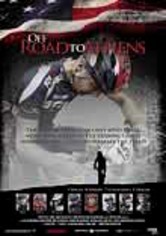 Off Road to Athens

2005 NR 1h 44m DVD
Eight world-class riders undergo the ultimate endurance test in this documentary that follows the selection process for the 2004 U.S. Olympic Mountain Bike Team. The cyclists -- four men and four women -- travel the globe to take on some of the world's most beautiful and treacherous courses. The film captures the thrill of the qualifying races as well as the personal toll this grueling competition takes on the athletes.