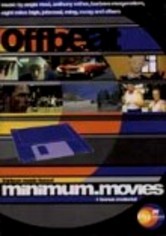 2004 NR 1h 0m DVD
This collection of short films from the Berlin-based company 89mm Minimum.Movies combines a mixture of music video, short film and animation. Jump from Johannes Ebert's "I Miss You 03" -- a patchwork of vacation photos set against music from German pop star Barbara Morgenstern -- to a numerical animation short called "Blick (Diaphan)" from Jörg Ritter. Also included are a puppet massacre from Astrid Rieger and Angie Reed's "Habibi."