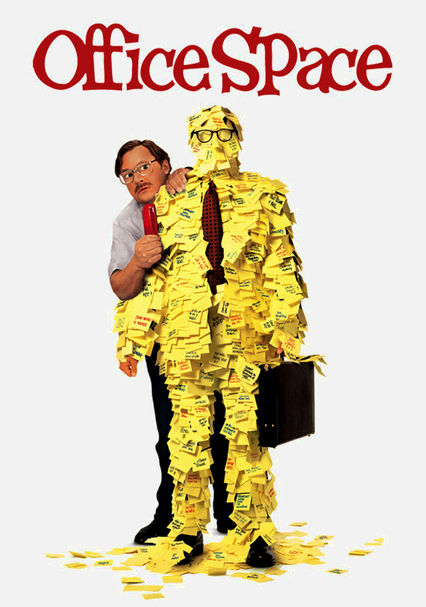 1999 R 1h 30m Blu-ray / DVD
In a comedy that jabs at corporate life, Peter conspires with his cubicle cohorts to embezzle money from their soulless employer. With help and hindrance from his peers, including quotable nerd Milton, Peter might find his sanity and his revenge.

Parents need to know that this dark-humor movie is from the mind of "Beavis and Butthead" creator, Mike Judge, and some teens will think it's likewise targeted at them. However, the subject matter of the movie -- dead-end jobs in banal suburban "campuses" with aggravating bosses --makes it more appropriate for young adults who themselves are in their first office jobs. The movie depicts stealing and implied arson. There is strong language, sexual references, and jealous fantasies. A character celebrates a horrific injury, there is an on-screen medical emergency, characters act illegally, and a mistreated character takes drastic revenge.

Explicit references to sex and to sleeping around, implicit sex, jealous fantasy. Brief shot of a topless woman on TV.

Strong language used by angry characters, in the music and as mocking insults.

Preconceptions are the cause of misunderstandings including the criminal history of a salesman and the treatment of a mentally challenged co-worker. One case of tremendously bad behavior is rewarded, while several characters maintain a strong moral compass.

The prevalence of commercialism in suburban life is a theme of the movie and the source of jokes, however there are also product placements that are not the object of satire.