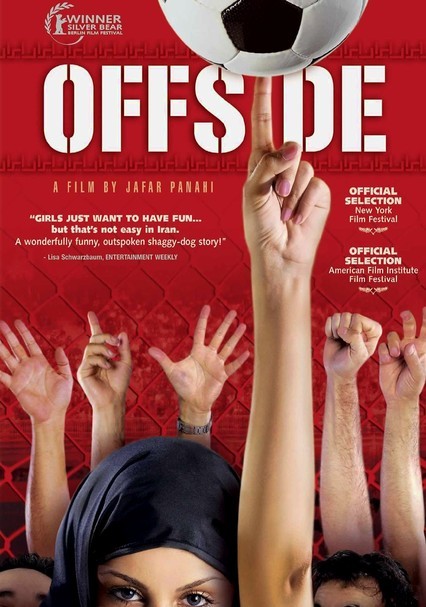 2006 PG 1h 32m DVD
In director Jafar Panahi's offbeat Iranian tale, several girls find themselves arrested after posing as boys to sneak into a soccer stadium to see a key international qualifying match. It's illegal for Iranian women to attend sports events, so the gate-crashers end up in a holding pen waiting for authorities. But a sympathetic guard watching through a peephole describes the action for the girls, who are eager to know what's happening in the game.

Parents need to know that this Iranian dramedy explores the gender inequalities that affect that country's young soccer fans. It moves slowly and comes with subtitles, so younger viewers might be bored. But the story -- girls disguise themselves as boys to enter the stadium, where no women are allowed -- might appeal to teens. When they're discovered, the girls are penned up until a bus arrives to take them to jail. There are discussions of political and legal oppression of women, as well as past demonstrations against the state. Characters (soldiers, a teenage girl and a young boy) smoke cigarettes.

Ongoing discussions over gender inequality in Iran; girls disguise themselves as boys to get into a soccer match; one girl has to use a men's public bathroom while watched over by a guard.

Rowdy male fans cause a bus driver to pull over; girls fear being discovered by security guards; once found out, the girls are penned up (one cries); boys begin a fight in the bathroom, pushing and punching; a boy tells story about his father and others hitting him when he was younger (he shows the scar on his head); girl tells the sad story of a male friend killed during a stampede at another match; firecrackers go off during post-match celebration.

Girls break the law to attend a soccer game, then bond when they're detained; soldiers reveal their vulnerabilities and uncertainties.