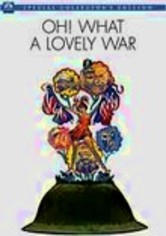 1969 G 2h 24m DVD
Based on the stage musical of the same name, director Richard Attenborough's wry satire is structured around a series of evocative vignettes that focus on the members of the Smith family during World War I. Scenes re-created include the assassination of Archduke Ferdinand and the famous Christmas meeting in no-man's land between British and German troops. Laurence Olivier won a BAFTA Award for his role as a British field marshal.