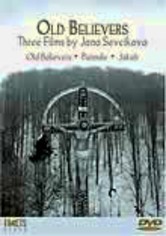 1984 NR 2h 34m DVD
Jana Sevcikova's collection of three short films captures the lives of the immigrants and exiles who live on the outskirts of Eastern Europe. Shot over a period of five years, "Old Believers" documents a religious community seeped in ancient traditions. "Piemule" reveals the experiences of the descendents of Czech immigrants living in Romania, while "Jakub" chronicles the story of Jakub Popovich, a Ruthenian man transplanted to western Bohemia.