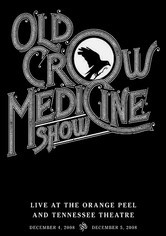 2008 NR 1h 14m DVD
Alternatively labeled alt-country, bluegrass and Americana, the American roots band Old Crow Medicine Show brings its string-centric style to Tennessee for these two live performances from December 2008. In addition to performing favorites from their three studio albums, the guys treat fans to a number of tunes they haven't recorded, including "Whelling Breakdown," "Raise a Ruckus" and "Sally Anne."