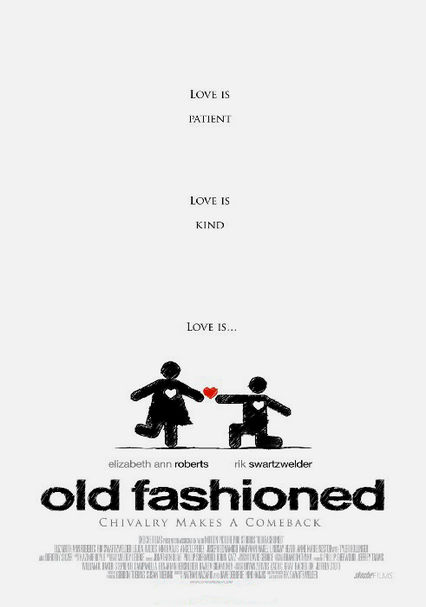 2015 PG-13 1h 55m DVD
Leaving his partying days behind, Clay Walsh has settled down to a quiet small-town life in accordance with his Christian principles. But his old-school beliefs about love and marriage are challenged when he meets free spirit Amber Hewson.

Parents need to know that Old Fashioned is a faith-based romance about a character who, because of his troubled past, wishes to marry -- but he refuses to date, touch, or be in the same room with any woman beforehand. Audiences who buy into the character's beliefs may find it refreshing, but others will likely be baffled. And for all of the main character's purity, the movie does deal with sexual/sex-related themes (unexpected pregnancy, etc.) and has frequent sex talk, including a "shock jock" radio DJ who talks about women and sex. Viewers see images from a Girls Gone Wild-type DVD (i.e. bikini-clad young women flirting/vamping), as well as a stripper at a bachelor party. A bouncer threatens the main character, and a woman tells a story about how an ex-boyfriend broke her wrist. Language isn't an issue, and substance use is limited to adult characters drinking socially in bars.

Sex and adult relationships are frequently discussed, including unexpected pregnancy, etc. A stripper begins undressing at a bachelor party. Images from a Girls Gone Wild-type DVD include young women wearing bikinis and flirting with the camera. A woman lets herself get picked up in a bar. A "shock jock" radio DJ talks about women and sex. Some innuendo.

A burly-looking bouncer threatens the main character. A woman wears a cast on her wrist; she explains that her previous boyfriend broke it. Some arguing.

Attempts to show how womanizing and partying are bad, but the other extreme (no dating/touching/kissing before marriage) isn't presented as the only appealing way, either, as many likable supporting characters' lives deviate from that ideal.

One scene lingers in a supermarket aisle, with Kellogg's cereals and Dentyne gum shown for a long while.