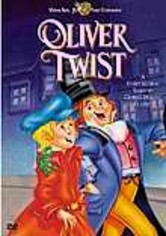 1974 NR 1h 30m DVD
This rarely seen animated version of Charles Dickens' classic story stars the voice talents of Josh Albee as the unfortunate Oliver -- who shocks the orphanage with his plea for "more, sir" at breakfast -- and radio star Les Tremayne as the scheming Fagin. Expect plenty of antics and spirited songs as Oliver tries to escape a life on the mean streets of London.