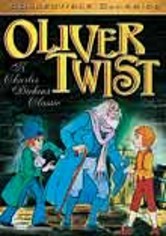 2004 NR 1h 15m DVD
An animated feature from the "Dickens Family Classics" line, this adaptation introduces children to Charles Dickens's novel Oliver Twist. Living on the streets, orphan Oliver joins a gang of juvenile thieves and also befriends Nancy, a down-and-out woman. A rich benefactor takes Oliver in, but the boy is then kidnapped. The lad is eventually reunited with his benefactor, but his life is forever altered by what he learned on the streets.