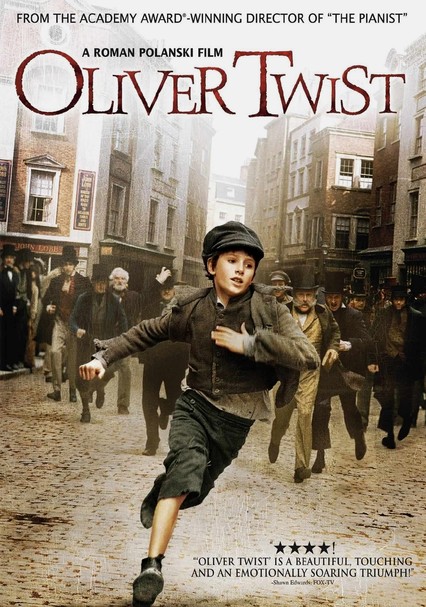 2005 PG-13 2h 10m DVD
In this faithful retelling of the Charles Dickens classic, doe-eyed orphan Oliver Twist finds a surrogate family of sorts after he flees the confines of a grimy workhouse to live among London's pickpockets and thieves.

Parents need to know that the film includes occasional brutal images of Oliver's suffering. He's beaten, starved, teased, tortured, and beaten some more. Scenes show Oliver sleeping in a box and in the street, in ragged clothes with bloodied feet and dirty face, bullied by bigger boys, chased by police and arrested, and kidnapped by thieves. Characters fight, smoke, and drink to the point of passing out. Some images are darkly shadowed and potentially frightening for younger viewers. The film makes clear that girls work as prostitutes. And one young woman is murdered, with some struggle, screaming, and blood splatter.

References to prostitution, attempted seduction, and rough handling of a woman.

Oliver is beaten and abused (at one point he breaks his arm); a young woman is murdered, with blood visible.

Smoking and drinking to indicate corruption.