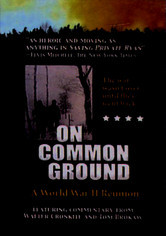 2001 NR 1h 28m DVD
Combat in the Huertgen Forest ranked among the most devastating of World War II, with American and German forces suffering casualties upwards of 60,000 troops. More than a half-century later, soldiers from both sides assemble at the site for an emotional reunion. The intense feelings they experienced as young men are never far from the surface. Tom Brokaw, Walter Cronkite and John Kenneth Galbraith provide commentary.