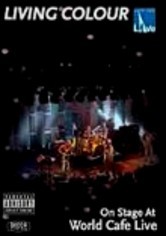 2007 NR 1h 0m DVD
Living Colour perform live in this HDNet program, which features songs off the hard-rock band's 2003 album "Collideøscope" and their Grammy-winning 1998 album "Vivid." An interview by radio personality Machaela Majoun is also included. After splitting up in 1995, band mates Vernon Reid, Corey Glover, Will Calhoun and Doug Wimbish reunited in 2001, leading to the experimental "CollideOscope," a compilation of rare tracks and a best-of collection.