On and Off the Rails 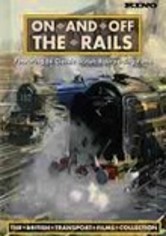 On and Off the Rails

2007 NR 2 discs
Starting in 1949, the British Transport Commission kicked off a prolific run as the maker of hundreds of train-related documentary shorts, the best of which are collected here in this exhaustive set. The notable films include "Blue Pullman," "Elizabethan Express," "Snowdrift at Bleath Gill," "John Betjeman Goes by Train," "Under the River," "This Is York" and many others. Fans of trains and British documentaries alike should hop aboard!