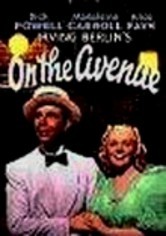 1937 NR 1h 30m DVD
When smooth-talking actor Gary Blake (Dick Powell) appears in a new play on Broadway that pokes fun at a wealthy, well-known family, he ends up attracting one of the clan's pretty daughters, Mimi (Madeleine Carroll), much to the displeasure of his onstage sidekick (Alice Faye). This classic Hollywood musical features a score by Irving Berlin, including the songs "(Let's Go) Slumming on Park Avenue" and "This Year's Kisses."