One Punk Under God 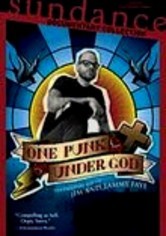 One Punk Under God

2006 NR 2h 48m DVD
In a six-part Sundance Channel series, punk rock evangelist Jay Bakker spreads his gospel of a more tolerant Christianity while managing his relationships with his famous parents, Jim and Tammy Faye Bakker. The program follows its pierced and tattooed hero as he faces some tough challenges. Jay grapples with his mother's cancer, reaches out to his estranged father, adopts a gay-affirming stance in the church and ponders a move to New York City.

Parents need to know that this reality series addresses the potentially sensitive topic of religion, with some bias toward or against certain religions. Jay Bakker (the son of '70s and '80s TV evangelists Jim and Tammy Faye Bakker) mentions having a difficult time with religion as he was growing up, and he's now creating his own religion, which bucks some of the conventions of Christianity. This may upset viewers who have an unquestioning faith. It may prompt others to think about what they do or don't believe in.

Jay's message is that he wants people to feel loved and embraced for who they are. But there is some bias toward or against certain religions.

Jay's followers congregate in a bar.