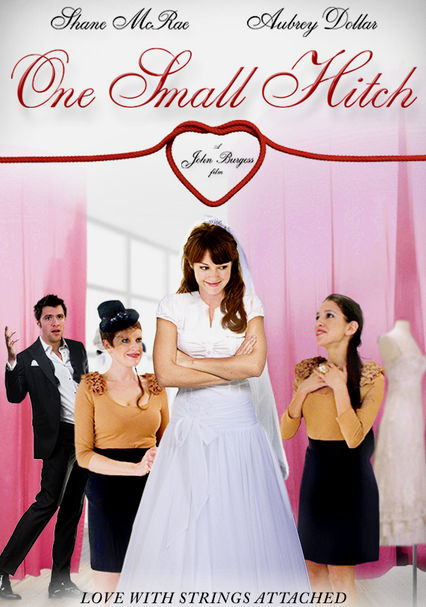 2015 NR 1h 45m DVD
Molly is flying home to Chicago for her mom's wedding and tells her family she is bringing a "Mystery Man." When she discovers her Mystery Man has a Mystery Wife, she dumps him curbside. In shock, she runs into childhood friend Josh who is flying to the same event. Josh convinces a reluctant Molly to play fiancée for a few days. As the lie grows, the two boisterous families begin to plan what is really a phony wedding and somewhere in the chaos Molly and Josh may actually be falling for each other.

Parents need to know that One Small Hitch is a funny romcom that's all about love, sex, and weddings, with the focus on sex. There's some partial nudity, and the characters spend most of the movie talking about getting ready to have sex (including talk about heart-shaped pubic hair) or having sex. There are some bad ethnic jokes about being Irish-Catholic and Jewish. There's also quite a bit of profanity ("s--t," "bitch," "ass"), drinking, and a few drug references (Ecstasy and some sort of sedative), making this edgy film best for older teens and up.

Many scenes with characters in underwear and partially undressed; one scene where you can hear people having sex. Lots of innuendo and jokes about sex and relationships. Some explicit talk about sex and an ongoing joke about Brazilian waxing. A character gives birth in a hospital.

A punch in the face. A character has terminal cancer and talks about dying.

It's always better to tell the truth. Love is when you can be yourself with someone. Some bad ethnic jokes about being Irish-Catholic and Jewish.

Lots of characters drink champagne, some until they're drunk; a few scenes of people drinking cocktails at bars. Molly takes a pill from a flight attendant that makes her loopy. A reference to Ecstasy. A character holds a cigar but doesn't smoke it.