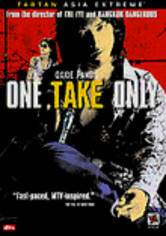 2001 NR 1h 30m DVD
When a prostitute (Wanatchada Siwapornchai) and a drug dealer (Pawalit Mongkolpisit) join forces, they make more money than they ever imagined -- but end up paying a price for their success. Writer-director Oxide Pang Chun helms this grisly, highly stylized Thai drama co-produced by his brother Danny, who previously worked with him on Bangkok Dangerous (1999) and later on the cult hit The Eye (2002).