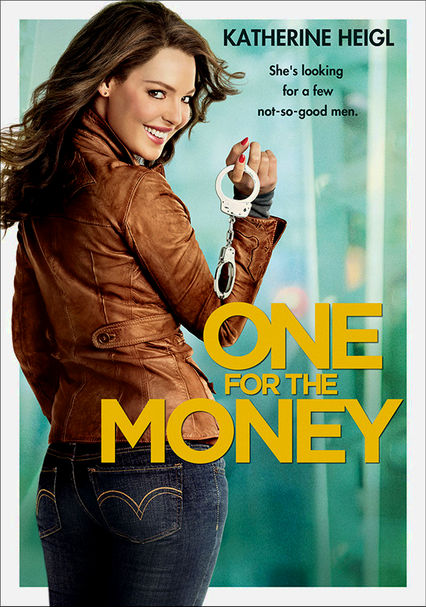 2012 PG-13 1h 31m Blu-ray / DVD
Janet Evanovich's spunky heroine, Stephanie Plum, is adrift after getting a divorce and losing her job. To make ends meet, she becomes a bounty hunter, with her first big case revolving around a high school boyfriend who may be falsely accused.

Parents need to know that One for the Money is a mystery comedy based on the best-selling Stephanie Plum novels by Janet Evanovich. Following a Jersey girl (Katherine Heigl) who's down on her luck until she learns the basics of bounty hunting, the movie offers some empowering lessons about what women can do. But there's some troubling violence in the movie's second half, as well as frequent language (especially "s--t," "a--hole," and exclamations like "goddamn"). Although there aren't any real sex scenes, there are plenty of references to sex, virginity, and prostitution, as well as two moments of partial nudity: one when an elderly nudist shows his bare butt, and the other when the main character is handcuffed to a shower rod, revealing the outline of her naked body (with strategic parts covered by her free arm).

Although there's no actual sex or even kissing, there are regular references to sex, prostitution (two prostitutes are prominently featured in several scenes), a high-school sexual encounter, and a sexual fantasy. One sequence focuses on Stephanie being handcuffed naked to a shower rod (her body is shown in profile, with her hand covering only her breasts). An elderly nudist's bare bottom is shown as he's taken into custody. Morelli attaches a wire to a shirtless Stephanie; viewers see her bra and a close-up of her cleavage.

The first half of the movie has some gun violence (a couple of the scenes are played for laughs) and pushing. Things ramp up in the second half: There's a car explosion that kills a character; two men are shot off camera, and their dead bodies are shown; another character is fatally shot; and there's a violent fight in which one person is bloodied and bruised and the other is pepper sprayed to unconsciousness. A body (not shown) is discovered stashed in a container.

The movie's chief message is that it's never too late to try something new (like a career), as long as you commit to it, ask for help from experts, and keep trying. Despite being called "cupcake" and underestimated by all of the men in the movie, Stephanie prevails.

Drug references include a character who opens the door with a bong visible in his apartment; he acts high on pot. References to a heroin dealer, and in one scene the heroin is discovered and discussed. Stephanie and Morelli drink beer together, and wine is consumed by adults gathered for dinner.