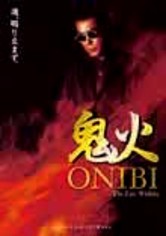 1997 NR 2h 10m DVD
A tour-de-force effort from director Rokuro Mochizuki (a specialist of Yakuza movies), Onibi tracks the alienation of a mobster after his release from prison. Kunihiro (Reiko Kataoka) vows to go straight after 27 years in the joint, but he can't entirely separate himself from his old lifestyle. He soon begins a downward spiral as his true nature and allegiance to "the life" begins to reassert itself. Kazuki Kitamura co-stars.