Only God Can Judge Me 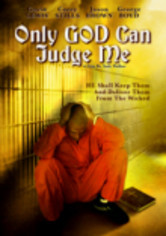 Only God Can Judge Me

2004 NR 1h 30m DVD
A young man in a desperate situation experiences the power of prayer in this poignant tale from director Tody Walker. Accused of killing his own cousin, David Marshall sits in his cell after the trial, waiting for the jury to decide his fate. As he considers all that he could lose in life, he flashes back to memories of his past, a past that includes a family who loves him and prays for him. Gavin Lewis, Corey Stills and Jason Brown star.