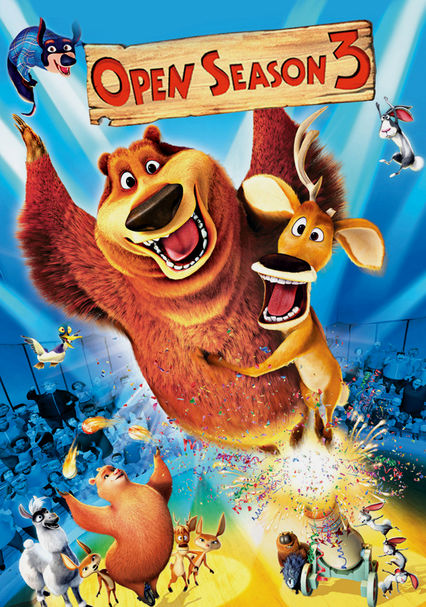 2010 PG 1h 15m Blu-ray / DVD
Grizzly bear Boog is geared up for the annual guys' trip, but his buddies want to stay home to spend time with their families instead. So, Boog heads out on his own -- and lands smack-dab in the middle of a traveling circus.

Parents need to know that Open Season 3 includes some mixed messages about gender roles and family life. On one hand, none of the guys can go on the guys' trip because of their family obligations, which are portrayed as a being a drag. On the other hand, Boog dearly wants to be part of a family. There's also some name calling and potty language ("butt" and "poop" etc.).

A buck jumps out of a cake and does a racy dance for the ladies.

Bunnies are tossed around for sport. Perilous falls, bee stings, and lightning strikes.

Although in the end, a male character realizes how important family is, the movie's plot focuses on going on "guy" trips and having "guy" friendships -- which plays into mixed messages about gender roles and the value of family (family obligations are depicted as a drag for the male characters, though not the females).

Before the menu screen pops up, there's a three-minute long infomercial (starring characters from the movie) for Sony's new 3-D device.