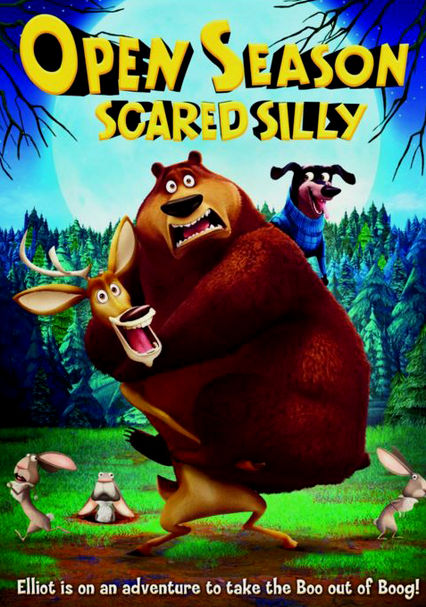 2016 PG 1h 25m Blu-ray / DVD
Terrified by a campfire story of a werewolf, domesticated Boog decides to "chicken out" of their annual summer camping trip until he knows the werewolf is gone. Determined to help Boog overcome his fears, Elliot and their woodland friends band together to scare the fear out of Boog and uncover the mystery of the Wailing Wampus Werewolf.

Parents need to know that Open Season: Scared Silly is the fourth movie from Sony Animation about a one-antlered mule deer and a grizzly bear who are BFFs. Joining the fun with Elliot and Boog are comic buddies and enemies who provide adventure in the picturesque town of Timberline. The franchise, noted for its plentiful, funny potty jokes -- much ado about "pee," "poo," butts, "tushies" -- and cartoon action -- in this case, a hunt for a legendary werewolf -- maintains fast-paced comedy, quirky characters, and slapstick jeopardy. Shotgun fire from a cackling villain, falls over a cliff, a mine cart careening over a raging lava plain, and some comically grotesque versions of a werewolf will scare only very young kids who aren't ready to deal with make-believe danger. Aiming for all-out fun with a few messages -- "face your fear," "words can hurt," "friends are always there for each other" -- grown-ups may enjoy the witty humor as much as the kids with whom they're sharing this offbeat trip through the forest.

Cartoon hijinks throughout -- all funny, all the time, with spooky music, shrieking wolf sounds, shadowy silhouettes, a cackling villain, and a goofy-looking gaggle of "monsters" (various forms of the "Wailing Wampus Werewolf"). There are falls from cliffs, crash-landings, chases, shotgun blasts, hand-to-hand combat (man versus bear), bee attacks, and a careening mine car zipping through a glowing lava field.

Potty humor abounds: "pee," "tinkle," "wet yourself," "butt," "tushie," and lots of "poo" jokes, including a lengthy scene in which the heroes track a werewolf via poo -- "precious doo-doo"; "poo is a window to the soul"; "Oh no, I ate a friend's poo!" Also includes some insults: "moron," "imbecile," "idiot."

Suggests that confronting fears is a way to get through them. Promotes friendship, loyalty, and teamwork. "Friends don't abandon friends." "Words can hurt." Good triumphs over evil.

The fourth movie in this series. Some associated toys and products are marketed.