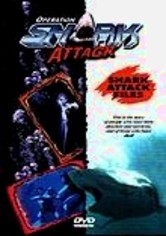 1998 NR 0h 55m DVD
Scarred people recount horrifying experiences of almost being eaten alive by the ocean deep's greatest predators -- sharks. Harrowing survival stories from Stephen Cross (who was attacked while surfing with his buddy) and Gideon Scheltema (who relives his near-death incident that gave him the dubious distinction of being the first recorded shark attack victim in South Africa) illustrate why the animals are the undisputed kings of the ocean.