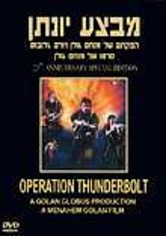 1977 NR 0h 54m DVD
A companion documentary to the classic Israeli film Operation Thunderbolt, Raid on Entebbe features interviews with top political leaders and military commanders who assisted in the rescue of more than 100 victims of a 1976 hijacking in Uganda. Much of the focus is on Yonatan Netanyahu, the commander of the Israeli forces and lone Israeli soldier to die on the mission. Netanyahu's younger brother, Benjamin, eventually became Prime Minister of Israel.