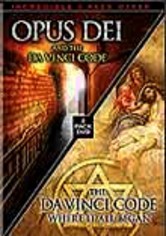 2005 NR 2 discs
Two documentaries shine a light on the secretive Catholic organization Opus Dei and French priest Bérenger Saunière's reputed wealth, which played key roles in the &NFiThe Da Vinci Code&NFi_;. In Opus Dei and the Da Vinci Code, British newsman and ex-friar Mark Dowd goes inside the prelature to explore its unusual practices, while The Da Vinci Code: Where It All Began probes the mystery surrounding Saunière's discovery at the Rennes-le-Château church.